Skip to content
"Not I, not anyone else can travel that road for you, You must travel it for yourself." Walt Whitman
jeanne@wandershereandfar.com
Follow Wanders Here and Far on WordPress.com

It was only luck that found me in San Jose, Costa Rica, for the Entrance of the Saints and Boyeros, an annual festival celebrating the traditional oxen and carretas.  The colourful carts, pulled by massive beasts of burden and led by the Boyeros, make their way through old town San Jose to usher in the Christmas season.  The brahman and longhorn bulls seem docile and unperterbed by the crowds as the more than 200 teams, accompanied by music and folk dancers, parade along crowd-filled streets to the Plaza de la Democracia.  The market at the end of the route offers local products like wine, honey, chocolate, and coffee grown and produced in the hills around San Jose.

The national symbol of Costa Rica, as well as the national symbol of the Costa Rican worker, oxcarts came to popularity in the mid-19th century to carry coffee beans from the Costa Rican interior across the mountains to shipyards in Puntarenas.  The unspoked wheels are designed to cut through muddy paths without getting stuck.  Painting of the carts began in the early 20th century, with distinctive colourful designs to each region.  More detailed flowers and birds were added with the progression of the 20th century, along with contests for the most creative artists.  Metal rings are installed to strike the wheel hub of the cart, creating a unique song as the wheels roll along the track.

Specific to Costa Rica, oxherding and oxcart traditions were inscribed in 2008 into the Unesco Representative List of Intangible Cultural Heritage, which comprises “cultural practices and expressions that help demonstrate the diversity of this heritage and raise awareness about its importance.”

Hand crafted and hand painted, the carts and yokes are still made in the town of Sarchi, a half hour outside San Jose.  The Fabrica de Carretas Eloy Alfaro, established in 1923, is one of only two manufacturers that continue the tradition.  Tours of the open air shop are offered daily and explain the process of curing, cutting and assembling the wood pieces, mainly cedar, laurel and mahogany.  Many of the machines are still powered by a water wheel as they had been 100 years ago, the straps and pulleys visible along the shop ceiling.

Once cut and assembled, each piece is passed on to an artisan who uses small brushes to paint the intricate designs, a tradition passed down from generation to generation. Visitors can try their hand at the traditional artwork in classes offered by the factory, creating their own special artisan bowl or tray.  Those less artistically inclined, like myself, can purchase a painted souvenir in the gift shop. 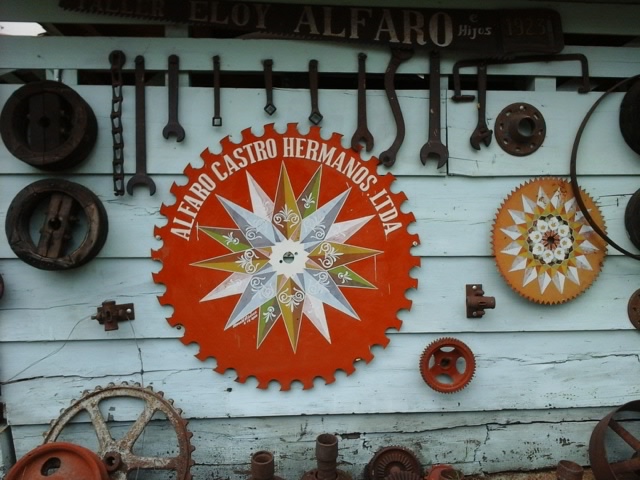 The carretas aren’t the only product manufactured in the shop.  Inlaid wood tables with a traditional sunburst design, traditional painted chairs, and carved rockers with stamped leather backs are among some of the beautiful work formed by the artisans and shipped all over the world.

While trucks and trains have replaced the carts in day to day use, it’s not uncommon to still see a team of oxen pulling a carreta loaded with produce in the small towns in central Costa Rica.  For the most part, they have been relegated to parades and local celebrations, loaded into lorries at the end of the day for the journey home.  It is the Christmas season, though, so don’t be surprised if you see Santa ride through town in one!

Jeanne aka Wanders Here and Far

View all posts by Jeanne aka Wanders Here and Far